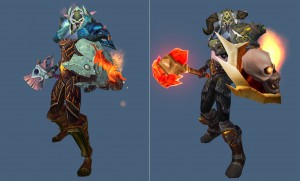 MogMyGear.com was a personal project of mine. It was inspired from the new feature Transmogrification, introduced in patch 4.3 of the MMORPG World of Warcraft. With transmogrification, called ‘mogging’ by the community, a player can change the look of his gear, allowing him to wear what he finds pretty without losing the benefit of his powerful gear. Since a database of cool looking gear didn’t exist yet and I got tired of trying to find matching pieces manually, I decided to create it myself.

To make a gallery

In order to view many sets on different kind of races, I had to make some sort of gallery. For that, I needed the pictures of all races wearing good looking gear sets. To find those sets, I had to extract them myself from WoW’s data files.

I modified a version of WoW Model Viewer and used it to extract names and IDs of all the gear present in the data files. From that, sets were generated using multiple algorithms that would match similar named items that follow Blizzard’s gear naming convention. A lot of manual labor was involved to get rid of faulty gear items (such as non-available duplicates and unavailable items), faulty gear sets (matching names but non-matching appearance) and missing gear sets. It took a lot of time, but I managed to extract a total of 1327 sets.

Of all those 1327 sets, I wanted to make a screenshot for each of the twelve races, for each gender and from tree points of view. In other words, the complete gallery would require a total of 95544 screenshots. And of course a thumbnail of each picture, meaning I’d have to produce a total of 191088 images. Luckily I could automate that process. It took my pc half a day to complete the task though. 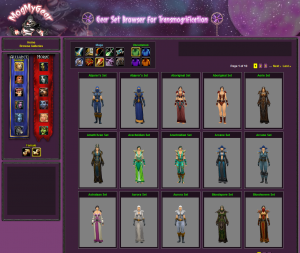 With nearly 100.000 images, I needed some sort of gallery to display them in an orderly manner. Since I was doing most things from scratch in the project already anyway, I figured I might as well build a website from scratch too. That is how MogMyGear.com came to be. The website was designed after the Ethereals, ghastly people who also provide the transmogrification in-game. The image buttons of the user interface were inspired after WoW’s user interface, replicating the same behaviour. I assumed this would make it more intuitive for people to browse the gallery.