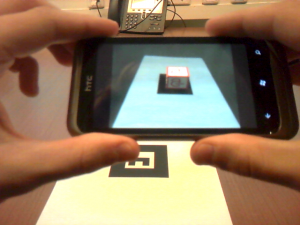 My masther thesis was combined with an internship that was available at Avanade Netherlands. The AR application that was produced as part of the thesis is property of Avanade, which is why I cannot share the code publically. If you’re interested in specific parts of the code or how something works, please contact me personally.

In this master thesis, we investigate and compare the usability of two interaction concepts for 3D augmented reality applications on handheld mobile devices. Augmented reality applications allow a user to look at the live image of a video camera and enrich the scene with 3D virtual objects. Interaction with the virtual objects requires the user to perform manipulations in 3D space, while common interaction on mobile devices is often touch screen based and therefore in 2D space. Mapping 2D space interactions to 3D space manipulations requires a non-trivial solution. We deal with this issue by mapping the interactions along the physical surface on which the virtual objects are augmented. This solution allows the user to move a virtual object along the physical surface, similar to an object in the real world, using only 2D interactions. %We devised a method to map 2D space interactions to 3D space manipulations, which takes advantage of the physical surface by detecting the location of the ground plane relative to the handheld device. We developed a touch-based and a crosshair-based interface that act according to this principle. The crosshair-based interface was expected to perform better in performance and usability, since it avoids some issues that the touch-based interface suffers from. We compare the performance and usability of these two interfaces by conducting a user study. From the results, we conclude that the touch-based interface outperforms the crosshair-based interface in both performance and usability for a various number of reasons. During the user study we also observe an important behaviour: users tend to keep the device stationary and use it as a window into the augmented reality environment. We present this observation as part of this thesis’ major contributions.